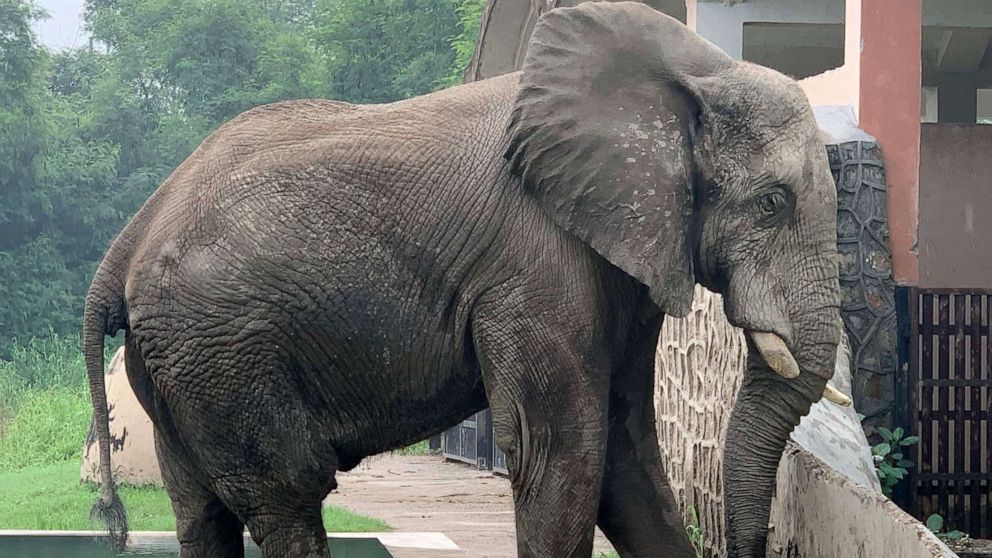 LONDON — When Nikita Dhawan first saw Shankar at the Indian capital’s zoo last August, she said her “heart was broken”.

The 26-year-old African elephant had chains around its legs and lived alone in a dismal enclosure. Shankar is one of two African elephants in Indian zoos and the only one in New Delhi National Zoological Park, according to Dhawan.

“He had no auditory or visual communication with the other elephants, he lacked intellectual stimulation or physical enrichment, there was a railway-like track right next to him, there were children screaming and he was chained up. 17 hours a day, which was shocking,” he added. Dhawan, a 16-year-old student at the American Embassy School in New Delhi, told ABC News during a recent interview.

“All of this distress actually caused him to engage in stereotypical behavior, which is a type of repetitive behavior like shaking his head or rocking his body,” she added. “And it was ironic because the kids around me thought he was dancing with happiness when it was the exact opposite.”

Dhawan, who is the co-founder of a youth-led animal welfare group called Youth for Animals, decided to launch a campaign last October aimed at sending Shankar home to Africa and raising awareness public to the fate of captive elephants. Dhawan and her Youth for Animals co-founder Nandika Karunakaram started an online petition through Change.org that has since garnered more than 130,000 signatures. They also sent letters to the zoo and various Indian officials, pleading for Shankar’s release.

Having received no response, Dhawan filed a petition in the Delhi High Court which was heard by a judge on January 3. The judge ordered the respondents to consider Dhawan’s arguments and set the next hearing for March 9, according to court documents obtained by ABC News. Respondents listed in the petition include National Zoological Park, Central Zoo Authority of India (CZA), Indian Ministry of Environment, Forests and Climate Change and Animal Welfare Council of India. India, none of whom responded to ABC News’ requests for comment or an interview.

Dhawan told ABC News that she has yet to personally hear from the zoo or the other interviewees.

In 1998, two young elephants were captured from the wilds of southern Africa and sent to India as a diplomatic gift from Zimbabwe. The couple, named Shankar and Bombai, have been placed in the 176-acre National Zoological Park, formerly known as Delhi Zoo. Bombai died in 2005 and Shankar has lived there alone in captivity ever since, according to Dhawan, who cited information obtained from the zoo through India’s Right to Information Act as well as private conversations with some of the zoo’s employees. .

Dhawan said he learned from those conversations that Shankar is chained up most of the day and zoo information says he is confined to 4,930 square meters. A path that once allowed visitors to get a closer look at Shankar has been permanently cordoned off due to his assault, which Dhawan says is another key sign of psychological distress.

“I think he made an effort to bond with the Asian elephants,” she told ABC News, “but the people at the zoo said he showed a lot of aggressive behavior, so they decided to keep it solitary.”

“The bottom line for Shankar is that we want a sanctuary where there are other African elephants,” Dhawan told ABC News, noting that “a home option would be a really good temporary solution for Shankar” but ” does not solve the problem of its isolation.”

“There is a misconception that male African elephants do not form social bonds,” she added. “But that’s not true, they’re social beings like us and Shankar deserves to be with other African elephants. So that’s really the reason to send him overseas rather than to a domestic sanctuary.”

Elephants are the largest living land animals on Earth. In the wild, they live in tight-knit herds, form lifelong bonds with each other, and can walk up to 25 kilometers – about 15.5 miles – in an average day.

In 1930, it was estimated that as many as 10 million wild elephants roamed Africa. Today, that number is down to around 415,000 after decades of poaching, habitat loss and human-elephant conflict, according to the International Union for Conservation of Nature (IUCN), a global conservation group. bringing together governments and civil society.

In 2009, India’s CZA, the government agency that oversees Indian zoos, banned elephants from zoo collections nationwide and ordered all zoos to transfer mega-herbivores to rehabilitation camps.

“There are very few zoos in the country, which have enough space to allow the free movement of elephants, as a result of which they are kept chained for long hours, causing stress to the animal,” the CZA said in the 2009 order, one of which a copy was included in Dhawan’s petition.

Still, many elephants remain in zoos across India, including two Asian elephants at the zoo housing Shankar and another African elephant named Rambo at Mysore Zoo in southwestern India. While Youth for Animals is currently focused on freeing Shankar, Dhawan said they also aim to move India’s other captive elephants to sanctuaries.

“The main focus of this campaign is not just about Shankar or an elephant; he is trying to open doors for all captive elephants,” she added. “We really want to inspire other people to speak up too.”

The Aspinall Foundation, a UK-registered animal conservation charity, has agreed to fund and implement Shankar’s translocation and rewilding process to Africa, if Dhawan and Youth for Animals are permitted to do so.

Dhawan, who was born in the United States but moved with her family to India at a young age, said she fell in love with elephants after volunteering with World Animal Protection India during the summer of 2020. It was then that she learned of the mistreatment of captives. elephants in his country of origin.

“I found it ironic because in India I feel like we always praise elephants as those kind of symbols,” she told ABC News, “but our words don’t reflect our shares”.

A year of change and new directions for municipal bonds

How Chinese property developers got into such a mess