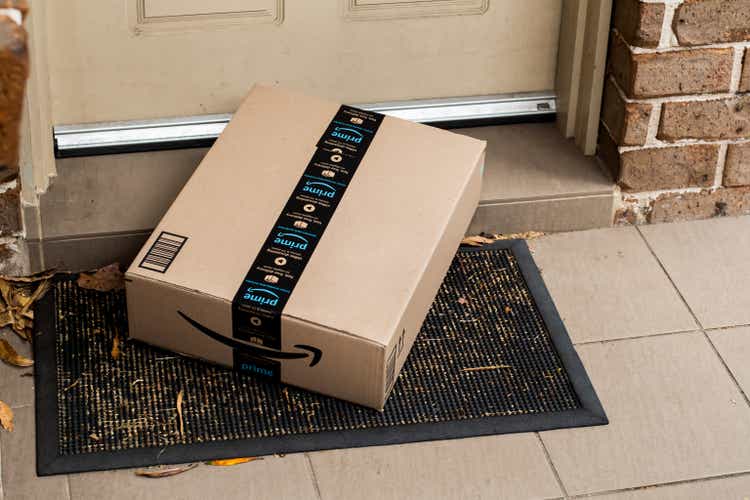 Amazon (NASDAQ: AMZN) releases second-quarter earnings this Thursday in what many see as a high-stakes report likely to have an impact that extends beyond its ticker, setting the tone for the market in light of current macroeconomic conditions.

Management released a moderate second-quarter outlook in April, forecasting revenue of $116.0-121.0 billion (3%-7% year-on-year growth), factoring in the economic challenges facing households including a 46% increase in mortgage payments, a 10% increase in food prices, and a 44% increase gas price compared to the same period last year. The situation is very precarious to the point that since AMZN published its forecast, mortgage, food and fuel prices have increased by 19%, 2% and 8% respectively.

Beyond retail sales, AWS and ad revenue will provide a picture of business sentiment beyond the disappointing PMI data released over the past few months. AWS’ resilience in the face of previous recessions and weak economic conditions is cause for optimism, but that doesn’t rule out a potential normalization in digital business trends, similar to what we’re seeing in the retail e-commerce sector. . Slowing demand for AWS cloud services will have a significant impact on AMZN shares, given its margins and contribution to growth as consumers tighten their belts in response to the rising cost of living.

The challenges of recent quarters will likely spill over to second-quarter results on Thursday. The market response to Walmart (WMT) guide cut yesterday demonstrates that things can get worse for AMZN stocks, despite low expectations from its retail segment. Consumers are still grappling with inflation and rising interest rates, and those challenges have intensified since AMZN released its second-quarter guidance in April.

E-commerce sales as a percentage of total sales have declined as consumers return to old shopping habits. The coming months will reveal the extent to which the surge in e-commerce activity is underpinned by a permanent shift in consumer behavior, as opposed to temporary COVID-related restrictions. Before the pandemic, e-commerce was growing linearly, making it easy to interpolate the impact of COVID lockdowns on e-commerce adoption beyond the organic growth trend seen before the pandemic.

E-commerce as a percentage of total retail sales has come close to the non-COVID scenario estimates shown in the chart below. The company’s results on Thursday will shed light on e-commerce activity before the US Census Bureau releases its second-quarter e-commerce data next month.

Most products sold on AMZN websites are AMZN-owned inventory, which we refer to as “1P” or first-party sales. Revenues from third-party or “3P” merchants account for approximately 20% of AMZN’s revenue. 1P sales and 3P revenue often move together, reflecting e-commerce activity for a given period. Last quarter, however, 1P sales were down 3.3%, while 3P revenues were up 7%, a difference of 10.3%. Management increased FBA fees by January by 5% (and again in April), which could explain part of the discrepancy. The remaining delta could signal a pre-emptive response to regulatory pressure or some concessions with regulators as management endures its most immense lobbying efforts since its inception. We’ve seen a similar dynamic in China over the past two years when Alibaba (BABA) was sailing under regulatory pressure aimed at its monopolistic practices, which culminated in a formal antitrust law being finalized in June and officially taking effect next month. A widening gap between 1P and 3P sales in Q2 would confirm this assumption, showing a rare capitulation to what many see as an opportunistic corporate culture.

Earlier this year, courts dismissed the US Attorney’s lawsuit against AMZN due to the narrow scope of current antitrust laws, rendering them ineffective in combating the market power of marketplace providers such as AMZN. However, the bills recently tabled (in the Senate and in the lower house) demonstrate the will of the legislators to see certain limits to the influence of AMZN.

Unlike Alphabet (GOOG), AMZN’s antitrust issues do not pose an existential threat to the company’s operations or even growth prospects beyond temporary disruptions that would shift growth to the 3P segment instead of 1P revenue. Revenue growth remains the main driver of stock performance rather than legal challenges.

Beyond temporary equity volatility, investors might overlook a downside surprise in the retail segment, but that doesn’t apply to AWS earnings. The division has become the cornerstone of AMZN’s investment hypothesis, driving growth in recent quarters. Although it only accounts for 14% of total sales, AWS contributes more than half of operating profit.

Data storage and processing is growing exponentially, embodying an essential part of the knowledge economy, providing favorable medium to long-term revenue for the AWS segment. Expectations are high for AWS, and any growth below 30% could lead to a sell-off.

AMZN’s margins will likely fall in the second quarter. Fuel prices rose faster than January’s increases in FBA and Amazon Prime. The tight labor market drove up wages at its fulfillment centers, which helped squeeze margins. Beyond rising operating costs, the company is expected to incur substantial losses on its Rivian (SHORE) position. During the second quarter, RIVN shares lost almost 50% of their value. Based on the company’s 158 million shares, I believe the company will report an unrealized loss on equity of $3.25 billion in the second quarter.

AMZN’s challenges in recent quarters will likely overtake Thursday’s second-quarter results. The economy is in worse shape than a year ago and monthly data shows mortgage, food and fuel prices have risen since the retail giant released its quarterly forecast in April. Margins will likely fall as operating expenses rise faster than the FBA and Amazon Prime fee hikes in January.

A lot relies on AWS, which has become the main source of income. Beyond temporary price volatility, AMZN stocks could recover from lower-than-expected retail sales, but that doesn’t apply to AWS. A growth rate of less than 30% fundamentally calls into question the company’s growth assumption underlying its above-average price multiples, potentially causing a stock sell-off that would be hard to recover from.