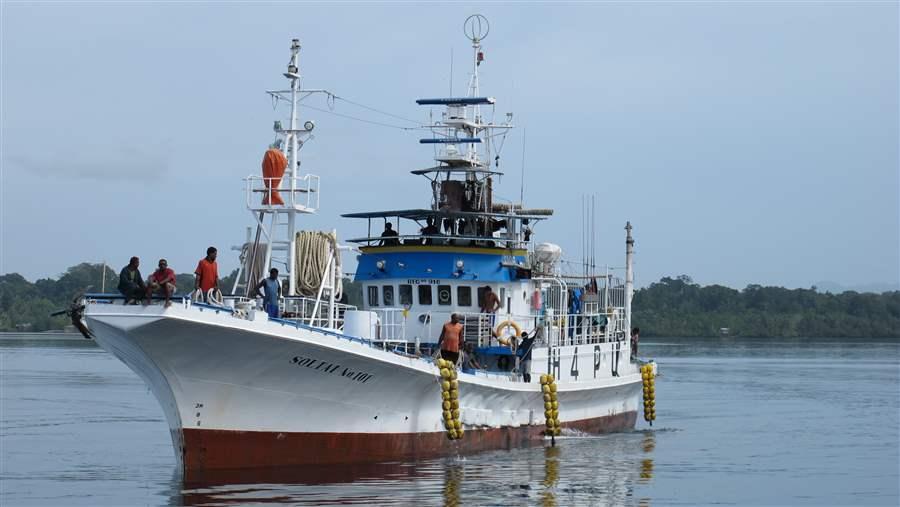 If you’ve ever eaten sushi, there’s a good chance the sashimi or spicy tuna roll on your plate has been caught by longliners plying waters managed by the Western and Central Pacific Fisheries Commission (WCPFC). This Pacific region is home to the world’s largest tuna fishery, worth $ 21 billion, according to the latest figures. Operating far from shore, sometimes spending more than a year at sea, longliners catch valuable tuna and other fish by sending miles of baited hooks. But due to the indiscriminate nature of this gear, these vessels also capture and kill other species, including vulnerable populations of oceanic and silky sharks, marlin, seabirds, and turtles.

At the next WCPFC virtual meeting, December 1-7, members will consider several proposals that would significantly improve the management of the region’s tuna longline fishery. It is essential that the WCPFC takes all measures this year.

Here’s a closer look at these crucial proposals and the way forward.

Independent human observers provide key information on vessel activities, which inform stock assessments and help fisheries managers ensure that conservation and management measures are implemented. Despite the valuable data provided by these people, longliners managed by WCPFC are required to have observer coverage on only 5% of their fleet operations. On the other hand, purse seiners must have independent observers who control 100% of their operations.

Although it can be difficult to involve human observers in long longline fishing trips, coverage can be extended by supplementing human observers with electronic surveillance (EM), which uses a combination of cameras, sensors. gear and GPS to extend surveillance to vessels that are not independently monitored. . COVID-19 has forced countries to reduce the coverage of human observers on vessels to protect human health, reducing effective coverage of longline fishing to just 3% and highlighting the urgent need for electronic monitoring programs.

At the December meeting, the United States proposes that the WCPFC double its minimum observer coverage in all longline fisheries to 10%. A proposal from member countries of the Pacific Islands Forum Fisheries Agency for WCPFC to commit to adopting ES standards in 2022 and establishing a regional electronic monitoring program by 2023 is also under consideration. Adoption of these two proposals would increase the monitoring of WCPFC longline fisheries. and constitute an important step to ensure their sustainability and sustainability.

The oceanic shark, once one of the most abundant deep-sea sharks, is globally threatened by longline fishing activities and listed as Critically Endangered by the International Union for Conservation of Nature. Its condition is particularly dire in the western and central Pacific, with less than 5% of the population remaining and existing conservation measures insufficient to prevent further declines. Since 2013, the WCPFC has banned detention, which means ships in the region cannot keep ocean spikes aboard, even if they are accidentally caught. While this is a good starting point for rebuilding the population, additional measures, such as gear changes to avoid shark bycatch, are needed.

Leaders, also known as trace steel, are used by longliners fishing for bigeye tuna, but when sharks are accidentally caught on the line they are unable to break free and frequently die. Switching to nylon or monofilament leaders, which are easier for sharks to bite on, would reduce ocean shark mortality and help give this population a chance to recover, while still allowing vessels to catch fish. targeted tuna. A recent study presented to the WCPFC Scientific Committee found that a wire ban would reduce ocean shark mortality by 36%. And a new proposal would require longliners to switch from wire to monofilament. By adopting this measure, Commissioners would join the United States and a host of other countries, including many Pacific island states, which have already switched to this less harmful device.

Improve data collection on transhipments or transfers of fish at sea

Transfers of fish between vessels at sea, known as transshipments, are an important component of the business models of some longline operators, with nearly 1,500 transfers reportedly taking place within WCPFC’s jurisdiction in 2019, an increase of 166% in five years. Current transhipment monitoring and controls are insufficient and continue to provide opportunities for illegal, unreported and unregulated fish to enter market supply chains. For example, the Secretariat of the Commission does not receive individual observer reports on transshipments at sea, requiring only summary reports from the country or countries whose vessels are engaged in the observed activity. In addition, there is no standardized form for observers, which means that each observer records information differently. These data gaps compromise the ability of the Secretariat to adequately monitor these activities.

At this meeting, the WCPFC should adopt minimum data standards to be used by transshipment observers at sea and should clearly specify that these reports should be sent directly to the Secretariat. Additionally, WCPFC is expected to adopt the Pacific Islands Forum Fisheries Agency’s proposal to review the results of ongoing efforts to address a broader range of concerns and revise the current transshipment measure in 2022.

WCPFC members presented important proposals for longline and related transshipment activities this year. It is essential that the Commission agrees to adopt these measures in December to strengthen the management of this billion dollar fishery and support the long-term viability of the industry and the affected populations on which it depends. Specifically, member states should embrace calls for increased observer coverage, deployment of electronic surveillance, removal of lead lines and removal of loopholes in transshipment reports.

Glen Holmes is an officer and Esther Wozniak is a senior partner in The Pew Charitable Trusts International Fishing Project.

Partial synthetic models of FeMoco with sulfide and carbyne ligands: effect of the interstitial atom in the active site of nitrogenase

From now on, Indians can pay in euros in France with UPI and RuPay cards